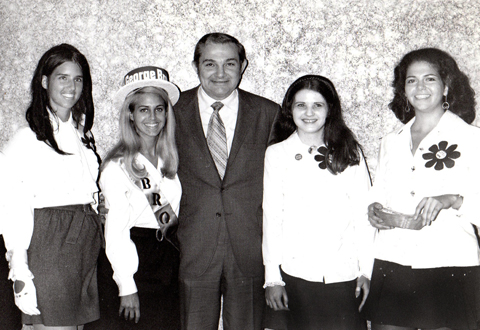 I was supposed to be at The Ambassador Hotel the night Robert F. Kennedy was shot.

Although I had never met the senator, I was a “Kennedy Booster,” one of the high school and college students like those pictured in the film “Bobby.” My group from the San Fernando Valley was going to be at the primary victory party.

My mother made me stay home and study for finals instead. She woke me up the next morning and told me that Robert F. Kennedy had been shot. “Kennedy was shot after victory speech. I was so shook up about it. He has little chance of living,” I recorded in my diary. I got an A on my English final, I noted in a subsequent entry.

I was that close to being part of the packed crowd and frantic scene. I might have been interviewed by the FBI, as my friends were in the weeks following the shooting. The closest I got was watching the movie, a fictional account of those touched by the event and reliving those moments on TV in the actual footage interspersed with the personal dramas. (My husband and sister point out that it was providential I wasn’t there because I probably would have been traumatized.)

Unlike many of my generation, I remember the ‘60s. I didn’t smoke, drink, have sex or do drugs, so perhaps I’m not an authentic representative of that era, but more of a sober witness. During the summer of 1967, my mother “volunteered” me to bird-dog for the Democrats. A group of high school students gathered on summer nights and walked precincts in the San Fernando Valley, and knocked on doors to solicit unregistered voters. We earned $1 an hour.

When Kennedy announced his candidacy, we joined other students (“boosters”) on the Kennedy bus to attend rallies, film TV commercials and work at fundraisers. Our campaign tour abruptly ended a few weeks later with RFK’s assassination.

A group of us became close, and Ray, a tall, dark and outspoken member of the group, asked me out. Our first date was at a rally at LAX for Eugene McCarthy, but Ray, a notoriously bad driver, couldn’t find the venue. He gave me his prized George McGovern pin (according to my diary, these buttons were “murder to find”), and I started collecting campaign pins.

My life changed after Bobby’s death, as though it were a catalyst for movement. Some of it was inevitable. Ray broke up with me a year later and his family moved to Connecticut.

I continued to participate in rallies and collect signatures for gun control. I worked in several campaigns, among them ones for Assemblyman Bob Moretti, Sen. Alan Cranston and Mayor Tom Bradley. “Star Trek” actor Leonard Nimoy signed my bumper sticker at one fundraiser.

Years later, I attended a wedding rehearsal dinner at The Ambassador Hotel. The valet driver crashed my then-husband’s Datsun 260Z into a wall, so my association with the Ambassador remains unfavorable. The hotel itself was demolished in 2006.

The decades passed. I became old enough to vote, but politics no longer held the same appeal as when I was young and impressionable. My adolescent diaries were replaced by journals. I studied journalism and raised a family.

My first husband was a Republican who berated me for voting for Jimmy Carter. My mother died. I divorced, resumed a career, and remarried (a Democrat). One campaign followed another, and presidents paraded through my life. None had the charm or promise of the royalty of Camelot.

It’s difficult to say how much of my disillusionment was because of the assassinations of political figures. Certainly, much of the enchantment of the dawning of the Age of Aquarius was interwoven with the excitement of first love and the headiness of early ventures into the outside world.

The formative years of the ’60s established the foundation for free expression and validated a young generation’s voice. The ideals remain. Freedom. Equality. People continue to speak out against abuse. Movement is slow, but “the cause continues,” as a Cranston pin proclaimed.

As much as things changed, they remained hauntingly familiar as I watched the movie “Bobby” and the reels of Vietnam War footage that had accompanied the 6 p.m. news every day as my family (eight of us) sat down to dinner.

Like a bad rerun, the footage from Iraq chronicles the same senseless story but on a different stage with more graphic images. In the theater, watching the movie, “Bobby,” I felt my eyes well as I watched the fallen soldiers, flag-draped caskets and body bags dragged across the screen. The peace we had dreamed of and worked for remains elusive in today’s political arena.

I relived the sense of shock at another unfathomable loss, remembering the assassinations of John F. Kennedy and Martin Luther King Jr. And I considered the status of those ideals for which they had died.

Like the characters’ lives in the movie “Bobby,” my life was disrupted on that night. As in the film characters’ stories, there was no resolution, only that brief moment flickering on the screen of our reality that jarred us from complacency.

It’s easy to speculate what impact RFK would have had on the world if he had not been killed. I wonder how I might have been affected if I had been there that night. As a member of a generation whose leaders encouraged Americans to consider the possibilities, I believe that imagination is a valuable legacy.

Speculation is all this aging Aquarian has. That, a collection of rusting political buttons and a ticket stub from “Bobby” to slip between the pages of a dilapidated diary.