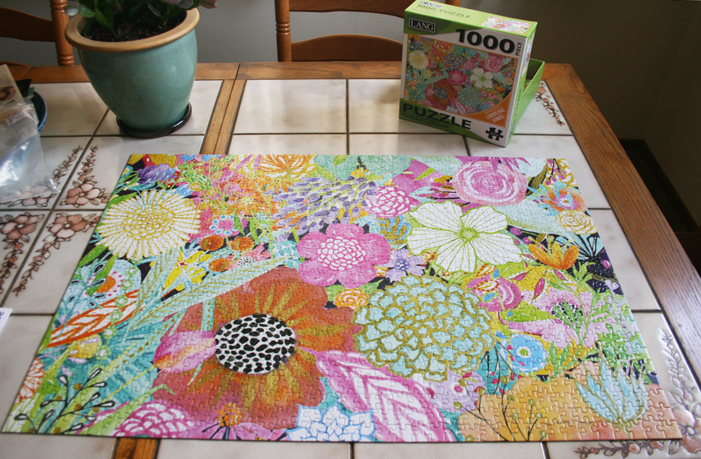 We don’t celebrate much on holidays, but this year it brought on more melancholia than I’d expected. We don’t have family nearby, and friends are usually busy with their families, so my husband and I spend quiet holidays together. This year, though, we were barred from social activities and I resented being restrained. I’ve decided that being in lockdown is like being grounded. In this case, I’m being punished for something I haven’t done wrong.

I also was missing my friend Linda Aleahmad, who had died in late January (see my earlier post, A Matter of Time). Last year, I had bought a jigsaw puzzle for her while she was hospitalized. I imagined working on it together when she was released and recovering. That never happened.

So I unwrapped the puzzle and set it up on one corner of our dining room table. I enjoy puzzles, something I remember my mother doing as she conversed with the next-door neighbor. At work, we had a huge one set up in a “rec room” where I would spend a few minutes when stressed. Our small local public library also set them up, and I enjoyed fitting a few pieces together as my husband selected his books.

This was a 1,000-piece floral painting. As I worked on it, I thought about Linda. We often spent holidays together at the movies or meeting for coffee. I still think about calling her before I remember that she won’t answer.

As I worked on the puzzle, my husband was watching CNN and the news about George Floyd’s killing came on. Over and over the video played as I went numb, just sorting pieces and moving them around. I can’t believe that we still have prejudice, police brutality, racism. My niece is biracial, as well as her four sons and my cousin’s daughter. I worry about the injustice they face outside our family. I wonder what it will take to end racism and how long this will continue.

I remember my mother fretting about the Watts Riot. We lived in North Hollywood at the time, and she would glance over our back wall to see if she could see the fires miles away. During my senior year of high school, I took a Cultural Minorities class. A group of us went on a field trip to Watts and spent the weekend with the community. The first night, we went to a dance where we were the uncomfortable minority (“White chicks have no rhythm”). We toured the Watts Towers the next day. On Sunday, we went to a church for a lively service. Then we came back to the San Fernando Valley and resumed our white-privileged lives.

Now the puzzle consumed my attention. Protests broke out, reminiscent of the demonstrations of the ’60s and ’70s. The sobering milestone of 100,000 deaths from COVID-19 was announced midweek. I became obsessed with working on the puzzle as I listened to news broadcasts. Friday afternoon, I completed the puzzle.

Everything else remains puzzling – the pandemic, racism, protests, President Trump’s bizarre photo op with a Bible. In the past, Linda and I would have talked about these things. Not everything gets resolved over coffee, but I miss hoping that it might be that simple.