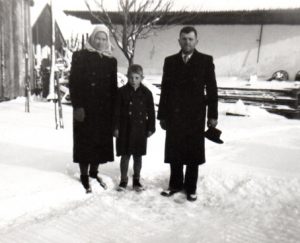 Google “Mary Scott” and you’ll see why I use my maiden name, Kolada, as part of my professional name. There are numerous Mary Scotts, some also in Ventura, including another patient of my primary physician, which has caused confusion. Some people remember my name because of Mary, Queen of Scots, and I’d be rich if I had a dollar for every such reference.

Kolada causes confusion, too. It seems simple enough – Ko-la-da – but some add an “n,” making it Kolanda. Classmates called me “clodhopper” and my large-size saddle shoes and clumsiness did nothing to dissuade them.

Curious people ask about its origin, some assuming that I’m Mexican, but I remind them that there’s no “k” in Spanish. I do say that it’s pronounced like Pina Colada with a K.

My father, who was born in America but raised in Czechoslovakia (now known as Slovakia), passed on the family name. He said that kolada was a holiday tradition in his mountain village in which the parish priest came to homes on Christmas Eve and blessed the tree and family. Literally, he said it meant “Christmas Blessing,” so my name could be Mary Christmas Blessing.

A cousin from Slovakia explained that it “really comes from Christmas tradition but it is regional expression,” confirming my father’s explanation. He said a similar word, “koleda” in the official Slovak language means Christmas song or carol.

Google “Kolada” and you won’t find as many as you would “Scott.” I did try to cash in on my name when the movie, “Mary Queen of Scots” came out. At the theater, I told the cashier that my name was Mary Scott and I should get in free.

“That’s cute,” she replied and charged me full (senior) price. It was worth a try but the movie was worth the price of admission.

(The accompanying photo is of my father as a boy with his parents.)